To SB's Christmas event in Mortlake, London. A day out doing art, but not drawing. On the train there, I sneakily sketched two ladies on the train. A thought crossed my mind - are these two going to what I'm going to? I'm not a subscriber to theories of type, but, well, they looked the type. They also had the spare bags containing what could have been bathrobes, just like my spare bag. And there was something arty about them ... Maybe not as they turned left out of the station where I went right.

Arrived mega early (a dilapidated church hall) and helped Esther shift chairs and make signs. Then brought in the mulled wine apparatus from Lucy's car. More people arrived in dribs and drabs, some artists, but mostly other people modelling.

A couple I knew from the workshop in November, including Richard Moon, who is a regular model. Really keen on life modelling he say, and busy with it, especially for the older gent. Artists love us, he says, we are so much more interesting to look at than the 20-year olds. As we were talking, and setting up easels, in walk the two from the train! Aha you! Aha you back! Turned out they'd popped to the pub.

When enough of us had gathered (~12 models), Esther took us through the posing plan. After a few quickies, we were to do Dance, followed by Raft of the Medusa, then the Last Supper, then whatever comes to mind. Esther positioned us like mannequins in rough alignment (printout in hand), talked through the logic of the poses and scattered sheets and cushions. We giggled and ummed and ahhed and wondered where our hands, feet, etc were going to land with respect to other models' faces, chests, legs etc.  We were advised about sightlines, holding of poses, taking rests and such. Rehearsals done,  bouncy Richard led us through a bit of a warmup. Note to self: get a lightweight yukata or something, as my fluffy bathrobe is too warm for warmups.

By this time, there were loads of artists getting set up (40 altogether), and we were nearing the kick-off time, or should that be strip-off time.

I've read other accounts of first-time modelling nerves (or naturist beach going nerves, equivalently), and of the dreaded first five minutes. There's an account of this emotion in this (deep breath) Daily Mail piece written by the journalist Lydia Slater who "braved" a previous SB event.

Not with me so much!  First 50 milli-seconds more like. After that I'm basically doing the work.  I know full well that the artists are just getting on with their jobs, and the pro models (of which one of my morning sketch targets was one) are doing theirs so I'm mainly thinking about whether the quick poses have anything to draw in them. As advised, I keep going around the clock face so that the artists get a change of scene. We run through our little repertoire of 1, 2, 3, 4 minute poses. Some of the younger people throw some wild shapes. I basically stand or stretch, and knowing full well that my bum looks big in this, try and shape my tum (abs, what are abs?) without appearing to be bothered by the process.

The models are 6 guys, with Richard, 67 at one end of the demographic and I guess Rui (another regular life model) at the other (25?).  Me, along with two other 40's blokes, in the middle. Womankind is represented by a clutch of students of various ages and dimensions but all basically young, a yoga teacher in her 20's (incredibly lithe/slim, probably an elf actually), and my two friends from the 11:54 from Clapham Junction, who are 50-something and maybe more.

For the first dance-based pose, Julie (of the train) and I pose together.  Julie life models fairly frequently (as well as keeping beautifully fit). She's quite sceptical, in a warm advisory way, of me holding my hand up for the entire pose (1 hour).  She's got a neat trick of resting her elbow on her hip.  Sure enough, my arm gets fairly tired, but it's manageable.  Here's the tai chi bit : I make sure there's plenty of peng jin, and that my back is full and the arm shape rounded.  I don't see what the others are doing, though a ballet bar comes in handy for some.  The artists all scratch and scribble, and Miles Davis poops away quietly in the background.  Lucy and Esther (the gaffers) wander around beaming at us and admiring the developing artwork.

Here's one of Julie, I'm the pile of twigs in the background, asking her if she'd like to do a twirl. 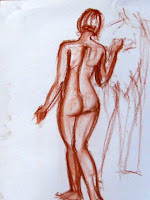 Then we regroup and form the dreaded Raft of the Medusa. There is no Hope! We're all going to Die!  I've elected to play the part of Man-who-encourages-the-damned-to-take-heart-for-there-is-a-distant-sail. Again, a foolish arm-in-air pose.  Others flop and lie around. The lucky ones sit or prop on the footstool, and bold Richard "waves" (in reality he gets the pole to rest a hand on).  This is very challenging, but a unique way to spend an hour.

I can imagine the conversations:  So what did you do when you were in London my dear?  Well father, I and another dozen people, mostly strangers, went to a church, but not to pray, but we all took off our clothes and piled together in the middle of the room at odd angles on a heap of old cushions.  Another group of people paid money to watch, and to record the scene. 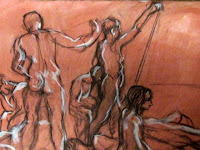 The tableau is clearly appreciated by the artists, and we models took pride in the posing. Esther is delighted and takes a few photos (these have not been cleared yet, so you'll have to imagine them). As predicted, my flying arm gets upset.  The first 20 minutes were bad, maybe it's the ambient music, but no, my arm complains about being still, and bearing its own weight. The second twenty minutes was a battle of will between my and my nervous system. The ambient music doesn't go anywhere. Then it started to hurt.  Aggh!  Wobble!!  The prone models didn't seem much happier, and at least I had space to move and re-adjust, so maybe my pose wasn't so foolish.

The break was very festive, and a chance to catch up on the artwork, mulled wine and stollen.  Re-robed for the walk-around (seems to be the etiquette) I met someone I knew from ULU drawing (which I hadn't been to lately, so we chatted about that).  It's plausible that this (dark pink paper) is her drawing, I'll have to check.

Next one-hour pose was the Last Supper.  Heavily modified to work in 360 degrees, as well as taking some liberties with, say, the gender of our Saviour.  This was much more fun, as Esther brought the mulled wine around and placed in the model's hands.  Excellent!

That's me on the end, before the wine cup got drawn in.  The full frontal, next, of the table shows more or less how this tableau related to the famous picture. 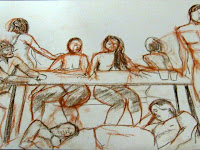 And finally we rounded off with a half-hour anything you want pose.  By this time all the models were very friendly.  Well, imagine a bunch of 12 mates had piled in for a sleepover in the front room, but sans pajamas.  You would be fairly friendly wouldn't you?

I mentioned all of this to one of my students at work (a fairly grownup one), in answer to the standard "did you have a nice weekend" type question.

"Ohh, really, life modelling, ohh ? I suppose it's quite liberating?"

"Well, it depends, probably for the target audience. Me, my shoulder's a bit stiff now".

PS, if you like the sound of this and want to know more, do get in touch with the Spirited Bodies people via their website or Facebook page.  They are looking to build up to charitable status, and are looking for supporters/sponsors, use of venues and other such things. Maybe some IKEA bags would come in handy for the cushions.

yes - i hanker after proper bags to put the cushions to haul them around, also more pillow cases and sheets, so i can stop using the ones i put on my bed & use some sheets to make big cases for the big cushions. a collapsible ottoman, like the one Rob brought along, would be fab too. Lucy-the-muller-of-wine Saunders (the SB team with Esther.

we were amazed you kept yr arm up so well, Matthew. what people don't realise about modelling is that you can, in reality, be weight training using the weight of your own limbs.

time is a strange thing when you are modelling. one of the things i like most about modelling is detaching myself from time - at the same time, a one hour standing pose is tough (i tend to do 45 mins max standing, only get to an hour when heartless artist 'forgets' to check the time because everyone is having such a great time drawing) so you want to hear that the time has gone.

glad you enjoyed it - and glad you liked the mulled wine and stollen. (NB that was a Christmas treat ... not always wine at an SB event)